Outsourcing Tech to Hungary 2021 — State of the IT Industry

Access to and competition over software talent is a challenge that all tech companies face today. As such, North American and Western European companies are increasingly looking to the global market for better talent at more cost-effective prices.

Central and Eastern Europe (CEE), specifically Hungary, has proven to be an ideal destination for IT outsourcing, thanks to a promising talent pool, highly proficient technical education, close-to-impeccable English abilities, cost-effectiveness, and compatible timezone and travel distances.

We’ll take a look at popular hot spots around the world and why more companies are outsourcing their software development and IT functions to Hungary now.

Overview of IT outsourcing: popular regions

For many years, India was the go-to place for all kinds of outsourcing services. As the biggest English-speaking country in the world with low development costs, India seems to be an ideal destination. With that said, as early as 2013, the software community has started to question the quality of engineering resources in India and deemed it as a region with “nothing to offer other than questionable rate savings.”

What about China? Afterall, China houses some of the most impressive software companies like Alibaba and is home to developers who are highly ranked by HackerRank in the programmers Olympics. While China may seem like a promising option, the fact that most developers do not speak English provides a high communication barrier.

Furthermore, Chinese companies are notorious for not abiding by non-disclosure agreements when it comes to intellectual property. As such, both India and China are not as ideal as they seem to be on the surface. Moving away from Asia, countries such as Brazil, Argentina, and Egypt are three growing countries for outsourcing in South America and Africa.

As Brazil continues to grow in the STEM area, its software development industry is also experiencing exponential growth. One of the main factors that contributes to Brazil’s overall growth is the strengthening of its STEM education across the country. As its educational system continues to grow, more and more software engineers are graduating from strong programs in the country.

Lastly, Egypt is also becoming a popular destination for IT outsourcing. Egypt, unlike Brazil and Argentina, attracts clients that are mostly located in Israel and the Emirates due to similar time zone and close distance. What attracts companies to Egypt is its extremely low rates. However, similar to Brazil, the software industry is still in its infancy—if you’re looking for top-notch professionals, architects, or tech leads, Egypt may be a disappointment.

This brings us to one of the most popular IT outsourcing regions in the world—Central and Eastern Europe.

Overview of IT outsourcing: Central and Eastern Europe

Central and Eastern Europe (CEE) has emerged as a software development powerhouse over the last 15 years.

According to a study done by SourceSeek, the most prominent factors that contribute to the success of the region in the IT arena includes its proximity to Western Europe, good cultural alignment with Western Europe and North America, low rates and high value, strong educational system, and widespread cultural support for STEM programs. 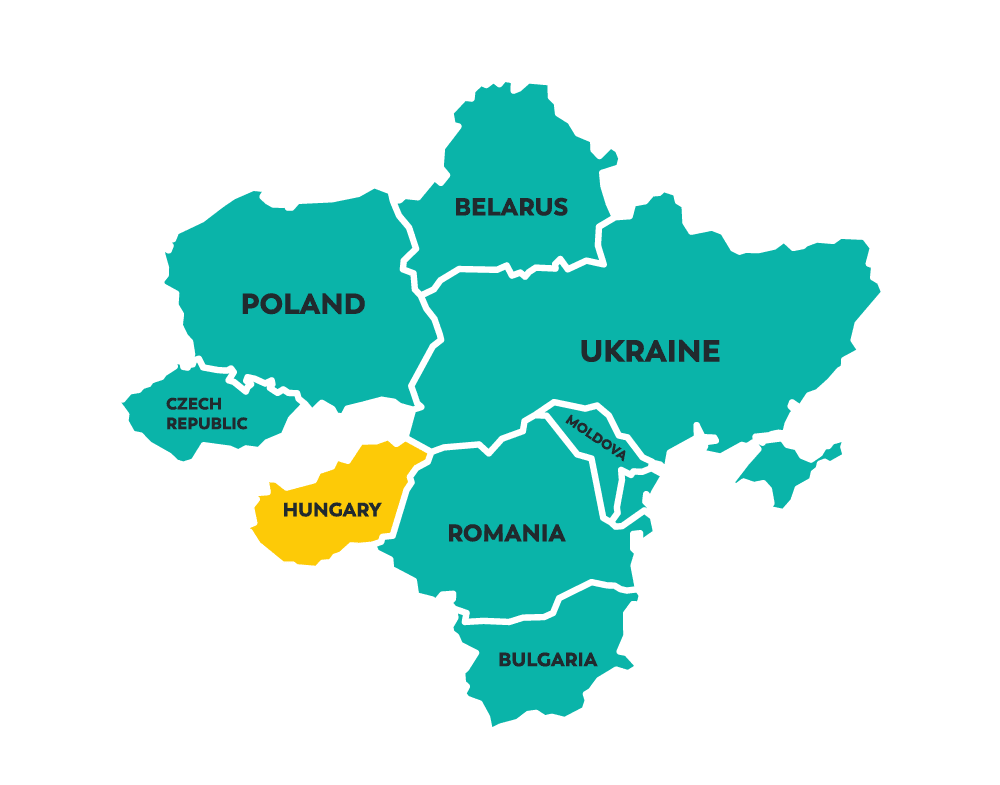 In the CEE, countries such as Ukraine, Belarus, Poland, Romania, and Czech Republic are often acknowledged for the sustainable growth of their IT industry and technological advancements. However, other countries in the CEE are also becoming highly competitive in the software development arena.

Here’s an overview of the IT professional population, annual IT graduates, number of IT companies, IT market growth rate, and average monthly salaries of software developers in various countries in the CEE:

While Ukraine has historically been the most popular outsourcing destination in the CEE, more and more companies in North America and Western Europe are looking to Hungary for software outsourcing services.

IT outsourcing to Hungary

While Ukraine has been one of the most popular outsourcing destinations in the CEE, Hungary is becoming more and more competitive, according to studies done by A.T. Kearney, Tholongs, Bloomberg, and more.

Ranking of talent pool and programmers

One of the indexes companies refer to when they evaluate which countries to outsource to is the density of their talent pool.

With that said, the density of software developers in a specific country should not be the only factor that companies consider. For instance, in the same study conducted by Pentalog, programmers in Hungary are ranked higher than those in Ukraine in terms of technical abilities.

In fact, in 2019, according to Pentalog, Hungary’s overall IT skills came third in all of Europe: 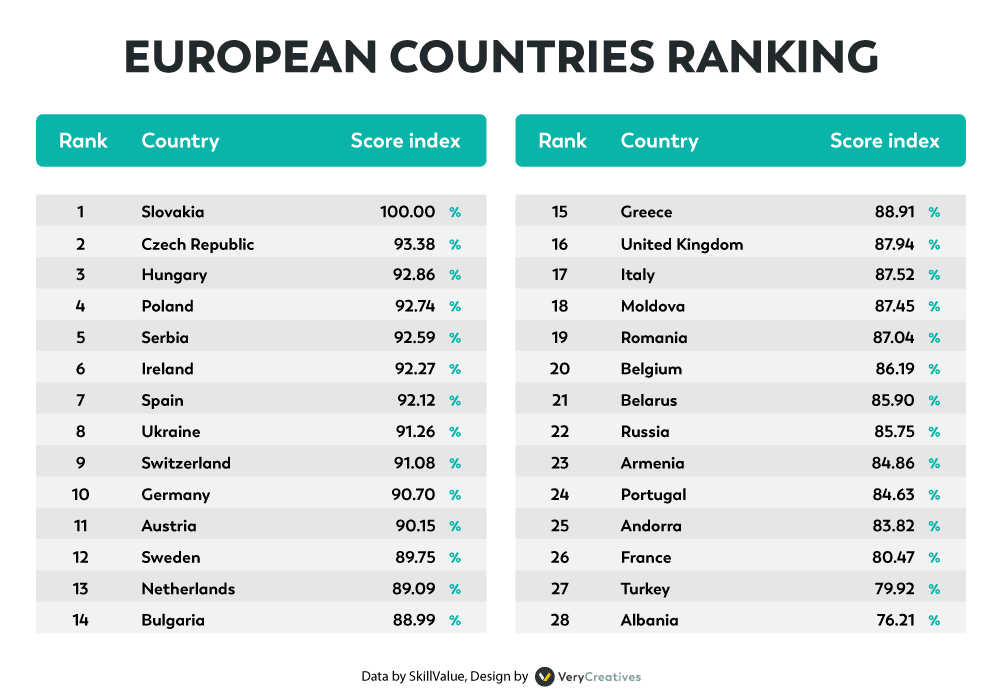 Therefore, if you’re looking for more highly skilled developers, Hungary may be more suitable than most countries in the CEE and across Europe.

According to IT Outsourcing Review, the demand for software engineers in Hungary greatly surprasses its supply. As such, more and more higher educational institutions are strengthening their tech education.

Not only are higher educational institutions providing more tech training for the younger generation, different types of programs, classes, training, and bootcamps are thriving in Hungary. For instance, within the last few years, more than 25,000 students have been enrolled in one or more types of educational programs to strengthen their software development skills.

It’s worth noting that all students who study in Hungary must pass the IELTS test in order to prove their English language skills because all classes are taught in English. As such, if your company is looking for software engineers who can not only speak English colloquially but also communicate complex technical concepts in English, Hungary is an ideal location because all technical higher education is conducted in English.

Generally speaking, all software agencies in the CEE charge very reasonable hourly rates, ranging from $25 to $150 per hour. While Asia may charge even lower rates, this article has already outlined some of the downsides of working with countries in Asia. Outsourcing locally to software developers in North America and Western Europe is also an option; however, the rates start at $50 an hour and can go up to $300 an hour, making it financially unsustainable for most businesses in North America and Western Europe for outsourcing.

Hungary is 6 hours ahead of US Eastern Standard Time and is only a 14-hour flight away. If your company is located in Western Europe, there is almost no time difference and is easy to travel to should you need to meet your “nearshore” software development team in person.

Finally, specifically for Western European companies in the EU, CEE countries are automatically compatible with the national tax rebate systems (such as the French CII/CIR), which provide your company with less overhead regarding financial planning.

What our clients think

Official reports are one thing, but nothing beats real-world experience. So we asked a couple of our clients at VeryCreatives what they see as the biggest advantages of outsourcing to Hungary.

Gary Sheynkman (Partner at Leyden Ventures) told us that the time zone is “great for Dubai” and that our English has been “perfect”. He values our straightforward culture-he knows we’ll tell him if we don’t think something is a good idea. He also mentioned the benefit that there’s less churn in employees in Central Europe, so you don’t lose people who know your app.

UK 2018 social entrepreneur of the year James Walker says that outsourcing to Hungary from the UK works because quality, skills, and culture are a good fit. He appreciates that VeryCreatives in particular offers reliable service with a can-do attitude. Also positive is the fact that the Forint, Hungary’s currency, is not impacted much if the British pound loses value (which could be a problem if you paid your outsourcing partner in Euros, for example).

I will choose Hungary anytime.

India, Pakistan, Kiev, etc… can take a project all the way to 80% of completion, and the remaining part is simply a nightmare. Lack of attention to details, loss of interest and overall very frustrating. The team in Hungary take a project to heart and spend the time needed to first understand it, every aspect of it, the why it exists, what would it take to make it work, put the end user first and then begin the work.

The level of output is well above expectations and the delivery is timely, on budget and the quality assurance is always a high priority.

The price quality ratio is extremely fair. It is not as affordable as India, Pakistan, or Kiev but the difference is worth every penny. The PMs work as an extension of the clients team, deliver what is required and provide solutions to every challenge, every hick up.

Martin Faltl (Chief Product Officer at Reachbird.io) mentioned that communication - especially the quality of spoken and written English - was crucial to build a long-lasting partnership with Hungarian development teams.

A few years ago we start to look for an external agency to outsource our development - instead of a service provider we found a real partnership. VeryCreatives’ developers are not just hired guns for us, they love and breathe our product, they come up with their own ideas and always go the proverbial extra mile for us.

The language barrier we very skeptical about in the beginning hasn’t turned out to be an issue at all. The only drawback we have experienced so far is not been able to visit VC’s office more often due to the distance even though we know the door is always open for us.

There you have it. Developers in the CEE bring world-class agile practices, easy-to-integrate capability, high-quality work, and effective costs, even as various countries are still trying to catch up economically.

In short, you can look to Hungary for software outsourcing, knowing that you will be working with some of the best talent at the best rates globally.